In XBMC Eden, the power to the USB ports is cut when S3 is entered. It is therefore impossible to wake the system using the MCE remote or any other device connected via USB.

The following two fixes in combination resolves this problem:

Getting power to usb when in sleep
HOW-TO:Enable Wake-On-Device for Ubuntu

Samba is not included with XBMCbuntu (at least in 11.10), so first we have to install it:
sudo apt-get install samba
Open Samba’s configuration file in an editor
sudo nano /etc/samba/smb.conf
Scroll down to the bottom of the file and add the following sections, which will create a public share with read/write access without password validation:

The above configuration example shares everything under the /media directory in a folder called “public”. The “force user” property must be set to a user with write access to the directory being shared. All files and directories will appear to have been created by this user.
Run “testparm” to check if your Samba configuration is parseable. For configuration changes to take effect, the Samba daemon can be restarted with
sudo /etc/init.d/smbd restart
The following screenshot shows my XBMC box sharing the /media directory which contains mount points for two harddrives (ingeniously named according to their capacities…):

These are the steps I took to flash a Linksys E2000 router with a DD-WRT firmware.

– Initital DD WRT firmware flash must be a trailed build. A trailed build has “*e2000.bin” in its name. Following flashes must have “*e2k-e3k.bin” in their name.

The tools I use for computer forensics.

It is possible to configure the harddisks to spin down after a period of inactivity, but if one or more processes keep reading and writing from the disks, that will prevent them from entering standby mode.
To find out which processes are causing disk activity, the following script is very useful:
blkdevMonitor.sh
The script works like this:

The following link contains a list of daemons and configurations known to cause random disk activity: Standby Mode FAQ
Older versions of Squeezebox Server caused lots of disk activity, but fortunately that has been resolved in version 7.5.1.
What is jdb2 and flush?
Sometimes the processes “jbd2” and “flush” are waking up the harddisk. As I understand, these processes are responsible for doing delayed writes to the disk in order to optimize performance. In other words, they are writing to the disk on behalf of other processes which makes it difficult to find the culprit(s). In my case, it was the samba daemon accessing the disk. As long as a PC or media streamer on your network has an open view on any of your samba shares, it will cause the disks to wake up.

Plug the USB stick into the Qnap. Then in a terminal, as root, do an lsusb to confirm that the USB drive has been recognised.

To find out what device name it has been assigned, do a dmesg | tail. This will print the latest lines from the kernel log, which should contain information about the inserted USB drive:

fdisk -l, which shows all connected drives, can also be used to find the right device name. The USB drive can be recognised by its size. In this case, it is a 2 GB one: 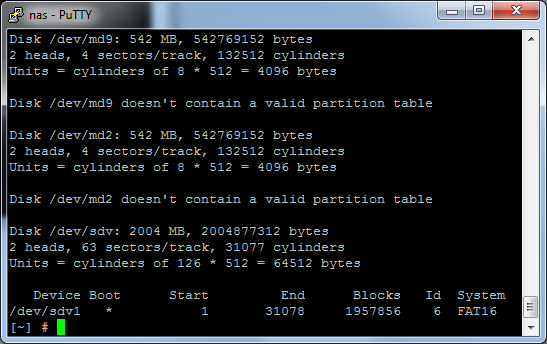 If the USB drive is already formatted with e.g. NTFS, it has probably been mounted automatically, in which case it should be unmounted. You can check this with the df command:

Once we know the name of the drive and it is unmounted, we can create a new linux partition using fdisk: 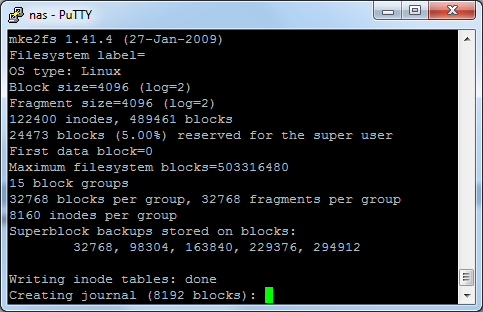 Now the partion is formatted and it can be mounted again:
mount /dev/sdv1
The USB drive is now ready for use 🙂

Daemon services, or just daemons, are started at boot time. They are roughly equivalent to services in the Windows world.
To see which daemons are available on a system, do an

Every script in that directory represents a daemon, which can be started, restarted and stopped manually using the following syntax:

If, for example, I wanted to restart an nzb-get daemon due to changes in its configuration files, I would type

After issuing the command, the daemon will usually print some lines to the terminal indicating what it is doing, e.g.: “Starting NZB-Get Daemon” or “Shutting Down“.

If you want to make sure whether a daemon is running or not, you can grep for its name in the list of running processes. If I wanted to see if the nzb-get daemon was really started, I could do the following grep:

If the daemon is running, this will produce a result like: